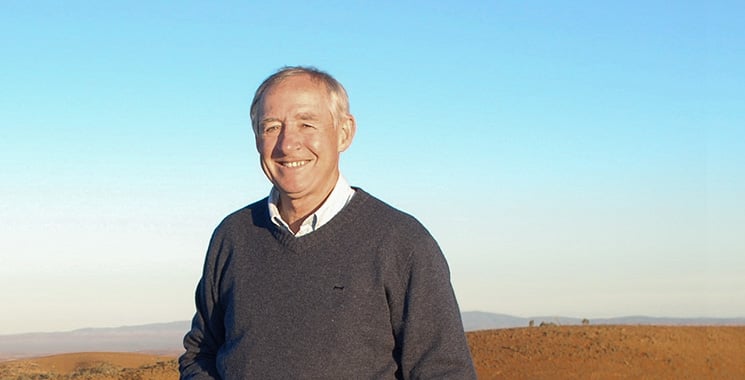 The McLean Foundation is a family foundation that has four areas of interest:  protecting Australia’s biodiversity; supporting inter-city, rural and remote literacy programs for disadvantaged Australian children; rural tertiary education scholarships; and community development programs.  Their environmental funding to date has included establishing and supporting The Nature Conservancy Australia and their Nature Writing Prize.  Robert McLean is the Chair of The Nature Conservancy Australia, a Senior Advisor to McKinsey & Co, and a Board Member of Philanthropy Australia.  Rob McLean shares his story below.

The easiest way to start giving in any chosen field is by meeting people, seeing projects and organisations first-hand.  In Australia we face the problem that most people – philanthropists included –  live in capital cities that may be 3,000 km away from these iconic landscapes that hold the biodiversity we are seeking to protect.

So it’s a real challenge to see conservation in action.  We don’t get to observe the Warddeken people practising Indigenous conservation, or visit them in Arnhem Land, or Gondwana Link in south-west Western Australia that has something like one in seven of the world’s plants!  What has opened my eyes, when you go to some of these places, is the indescribable beauty of the landscape.  Seeing is believing, and it spurs some people on to action.

I’m a kid from Broken Hill, often called the ‘Near Outback’.  Some people  looked at that arid country and didn’t see beauty, but I felt that beauty.  Many years ago I convinced my wife, who was living in New York, to come back to Australia –  and I had the excitement of having her see the Barrier Ranges, and the Great Anabranch of the Darling River, for the first time.

With all of those experiences there is a link to people. Take the Indigenous Ranger Don Rowlands from the Simpson Desert National Park, for example. Lake Eyre is his country, and listening to him talk about it is so powerful.  Similarly, meeting  conservation expert Keith Bradby at Gondwana Link allows you to see what is there on a whole different level.

As most of our donors aren’t going to get to these places, we have got to find ways of telling the stories of these places and of conservation efforts, and that’s where media, and particularly social media, have become quite important.

My wife Paula, who has a publishing background, came up with the idea of setting up a nature writing prize aimed at encouraging writers to explore the Australian landscape and their response to it—its beauty, fragility and resilience, and sometimes its desecration.  The Nature Conservancy Australia Nature Writing Prize was launched in 2010 by the celebrated American essayist, Barry Lopez, and Australia’s prize-winning nature writer and poet, Mark Tredinnick.  Two prizes have been awarded to date.  For our foundation, this literary prize complements the normal approach to either funding capacity or funding a project.
“I believe most people learn about nature and the environment by experiencing it and reading about it.  Nature writing, often called the ‘writing of place’, is a powerful genre in helping us to consider our natural environment and think more deeply about the ways we impact on it, positively and negatively.  Having the prize under the umbrella of The Nature Conservancy gave McLean Foundation a way of combining our interest in protecting Australia’s biodiversity, literacy and creative writing.”   Paula McLean, McLean Foundation Trustee

I’ve taken a view for a long time that the best way to get impact is to build capacity. I know that’s not always the conventional view – a lot of people just want to back projects rather than fund overheads, but I feel that’s rather limiting and short-sighted.

The areas I’ve been most keen to support have been The Land and Its Biodiversity, and Water and River Systems.  It is always a challenge to find the right projects or people, the right opportunity to make an investment in a particular field. We are looking for organisations where we can have a lot of confidence in the people and their staying power and ability to generate results.

Today we are already seeing considerable support for advocacy activities. The question is going to be how much goes to advocacy versus how much to implementation work on the ground.  There will always be a role for advocacy, but my perspective is that others do that well, so I’ve not gotten involved in that way.

I think the most rewarding project I’ve supported was bringing The Nature Conservancy  (TNC) to Australia ten years ago,  which we did from scratch for they had no plans to come here, and seeing the work they have done to protect crucial habitat.

It was a matter of devoting time and money to convince TNC that they should invest and have a presence here. So much has happened through that process.  Over time we’ve raised A$40 million, of which organisations like Bush Heritage and Australian Wildlife Conservancy have each got over $10M.  We’ve arranged 15 fellowships where we’ve brought senior people out to spent time helping with governance, marketing, or fund-raising.  So besides money TNC have provided skills and experience to help local environmental organisations grow and build their capability.

One of the things that has worked extremely well for environmental donors in Australia is the National Reserve System, and the preparedness of the government, where an acquisition will protect biodiversity, to provide two thirds of the funding.   When the Fish River Station in the Northern Territory, was offered for sale, Nature Conservancy was able to put $1 million up towards  acquiring a property for $13 million.  Now we had support from the Indigenous Land Corporation and the Pew Environmental Group – but a very large part of that support came from the National Reserve System.

Similarly, the path-breaking challenge that David Thomas put to TNC in Australia  in 2006 was catalytic, offering to provide matching funding for $10 million.  At the last count that has mobilised A$28 million, so it has matched funds beyond his and my expectations. This is a great illustration of the leverage that can come from philanthropy.

I think the framework AEGN has laid out in Giving Green is a really valuable one, that recognises you can make single or multiple, very small or very large, contributions that all have impact.    There’s an expression that is getting a lot of currency in philanthropy at the moment -‘collective impact’.  It certainly resonates with me because if I am to provide $10,000 to something it may be helpful or it may not, whereas if 50 people each provided $10,000 you can look quite differently at the scope and potential impact of those collective gifts.

Starting small and expanding your commitments based on the results you see is a marvelous way to go.  For example, I asked David Thomas (The Thomas Foundation) if he would support bringing The Nature Conservancy to Australia. He offered $20,000 to do a feasibility study. At the time I said brashly “that’s not nearly enough”, but the irony is that David later provided $100,000, then $1 million, and then $10 million to support this initiative! So he was validating the ability of the organisation to get things done each step of the way. We can all benefit from this lesson.

It fascinates me that scientists now realise, contrary to accepted wisdom a decade ago, that even when you have large protected areas the size of Kakadu, it doesn’t  mean you’re going to be able to lock in protection of the species that live in that area.   What the science tells us now is that the only hope we have is by taking landscape views and dealing with whole ecosystems, and actively reducing the threats, such as invasive species, feral animals and bushfires.

It has become terribly important to look at national parks and land acquisition as a strategic investment in the context of protecting a whole corridor.  The  risk is that if we don’t expand the funding base to make these strategic acquisitions for corridors,  we’ll end up with ‘paper parks’, meaning they are designated protection only on paper because they don’t have adequate resources to address problems and implement solutions.

I don’t think there’s any doubt it’s going to be up to communities and philanthropy to do this work, alongside government.  It’s not just the direct funding that’s crucial, it’s also the enabling factors that play a key role.  We’ve made some great advancements in the ability to put a conservation easement on land in order to protect it. But its still way too costly, compared to what we see in North America.

There you can go along to a local land trust that operates out of a real estate or lawyer’s office, and register a conservation easement on your title for a modest sum, and you have the satisfaction of contributing to conservation in perpetuity.
Here (other than with Trust for Nature in Victoria that operates under a similar model) the path we’ve gone down has been to  have government entities that do it, but at a high cost.  Now if I donate a painting to the  National Portrait Gallery, I give via the Cultural Bequests Program and don’t pay Capital Gains Tax on that gift.  A very simple enabler would be to extend the equivalent of cultural gifts to conservation, which would encourage a lot more people to make gifts of land linked to these corridors.

We are at a point where we recognise that philanthropy, business and government all have crucial roles to play.  Even with the best will in the world in private and non-government organisations,  our conservation objectives are not going to be achieved without government support. So I feel we’ve come to a more mature place in terms of our thinking.