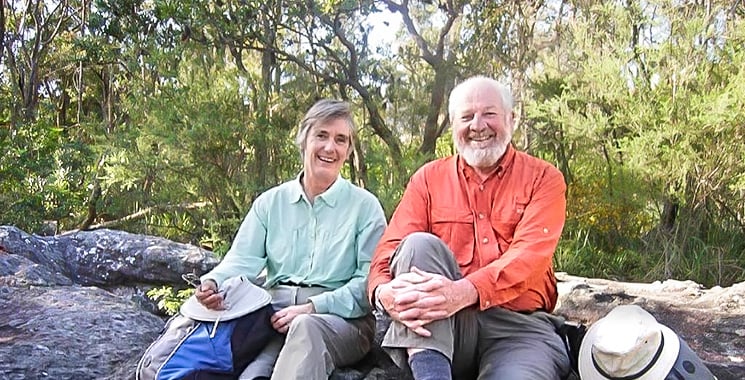 Robert Pallin is the son of Paddy Pallin, founder of the specialist travel and bushwalking retailer. Rob is currently the Executive Chairman of the Paddy Pallin Group and, along with his wife Nancy and son Tim, on the board of trustees of the Paddy Pallin Foundation. Robert is also involved in several conservation groups including the Nature Conservation Council of NSW (NCC) and its Bushfire program. Robert participates in bush regeneration on Jamberoo Mountain and Lord Howe Island, and is also a member of the National Parks and Wildlife Service South Coast Advisory Committee and the Lord Howe Island Board.

Back in the 1970s Dad and I decided that we should put something back into the rucksack sports – bushwalking, canoeing, climbing, those sorts of things – which provide our customer base. We didn’t set up a foundation, Dad looked at it at the time but it was just too difficult, so instead we announced our grants allocation each year (a percentage of company profits) and asked for applications.

One application, in those early years, was from the Wilderness Society for a projector to show a film on the Franklin River campaign. One of the conditions of our grant was that once the campaign was over the projector would continue to be used for charitable purposes. Anyway, someone rang me about 2 years ago to ask what they should do with it! I suggested giving it to the Powerhouse as an example of antiquated machinery.

From tiny beginnings to $2 million

I grew up in Sydney. Some bushwalker friends of Dad’s, after WWII, bought a property in the Illawarra Escarpment. They ran goats and grew vegies and flowers – selling their flowers to the local pubs at that time – and living a subsistence lifestyle. They originally pitched two army tents and bushwalker friends would come and stay, eventually buying land next door. It was a whole community, and that’s where we used to go for holidays in my childhood. It was a very special place.

So I asked Leonie Gale, then CEO of the Foundation for National Parks & Wildlife, if she would be interested in joining me to fund a new program. We embarked together on an effort to source matching funding, and that first year we ended up with $30,000 for a 3 year trial period. National Parks wrote to everyone with conservation agreements and asked for applications. The following year Colin Brown and other donors joined us and we had $100,000 to give away. When the next election came up the NSW Environmental Trust (another hat I wear) put aside a separate amount for voluntary conservation agreements. So there was $2million over 6 years for this purpose, and someone employed to manage it – all from such tiny beginnings!

Setting up the Foundation

We set up the Paddy Pallin Foundation in 2007, just at the time that PPFs (Prescribed Private Funds) were being changed into PAFs (Private Ancillary Funds) when there was considerable uncertainty. Our solicitor said ‘let’s just go for the full thing’, so we established a perpetual foundation which has the freedom to give to a wide variety of organisations.

My wife Nancy and I, and our son Tim, are on the board. There is a management committee, but Nancy and I do all the grants research and decision making. Because we’ve only got a relatively small amount of money – $40,000 to $50,000 per year  – we’ve refined the areas in which we give.

As well  as the Private Land Conservation Grants, we have a Science Grants program which last year gave five grants of up to $7000 each to PhD students or early career scientists. Some are designated for marine scientists, and some are terrestrial. Humane Society International and the Foundation for National Parks and Wildlife contribute and the program is managed by the Royal Zoological Society of NSW.

We also support advocacy, for I believe that if carefully managed advocacy projects can achieve far-reaching results, such as legislative changes.  We funded the Nature Conservation Council to undertake a review of several  government policies, including the BioBanking program (Biodiversity Banking and Offsets Scheme).

In partnership with the National Parks Association, we recently funded a phone app which allows citizen surveys of biodiversity. It’s a simple survey tool to capture photos, use GPS to record the location, collect answers to a few simple questions, and then the data can be uploaded to a spreadsheet later when you get back into a Wifi area. The researcher can cull spurious sightings and upload the findings to the Atlas of Living Australia. Its an exciting application, to which anyone can contribute – bushwalkers, farmers, land managers.

The Ku-ring-gai Council named a park after my Dad and we fund a professional team of bush regenerators to regenerate the native vegetation  there too. It’s only a little bit of money, but it’s been 13 years now, and that little bit of bush in Lindfield is looking really superb. We’ve been able to document it and put it on the Paddy Pallin Foundation website and we’ve published the bush regeneration model in Ecological Management and Restoration journal.

My personal conservation efforts tend to focus on bush fire issues. I was really impressed with Australian Wildlife Conservancy up in northern Western Australia where they own very large properties. They think very ‘big picture’, and implemented a fire plan across five properties in conjunction with the neighbours. This enabled them to do broad scale patchy burns which have really increased the biodiversity of the area.

My advice to new donors is firstly to do their research: talk to other funders, to the AEGN, to make sure you have a clear idea of what you want to achieve. Then suck it and see, with small grants within a set time frame – eg. a 3 year trial.

To test out new ideas, donors can co-fund through an established foundation, rather than having to set up their own foundation. We have a few donors who give to us regularly – one donor dislikes her husband buying new cars, so every time he buys a car she gives a donation through us!

I know that most philanthropic giving goes to medical research and the arts. Certainly the latter field looks after their donors a lot better than environmental organisations do. I have personal experience of this. I decided to do something different for my 70th birthday, so Nancy and I have commissioned a piece of music for the Australian Chamber Orchestra. We selected a composer and have attended rehearsals, and during this process the ACO has really taken us in as a part of their family. It’s been an interesting lesson in how to really look after those people who have supported you.

If you give to environmental organisations – you donate, they say thank you and you get a report, but they just get on with the job.  It’s no doubt a cultural and economic thing; they are so focused on the work at hand and they don’t have anyone one looking after their relationship with their donors.  But it’s common sense – you need to be in contact with your major donors more often, invite them to events, occasionally have them for drinks and nibbles to hear about what the organisation is doing. The environment movement is heading towards improved donor relations, which will make a big difference.