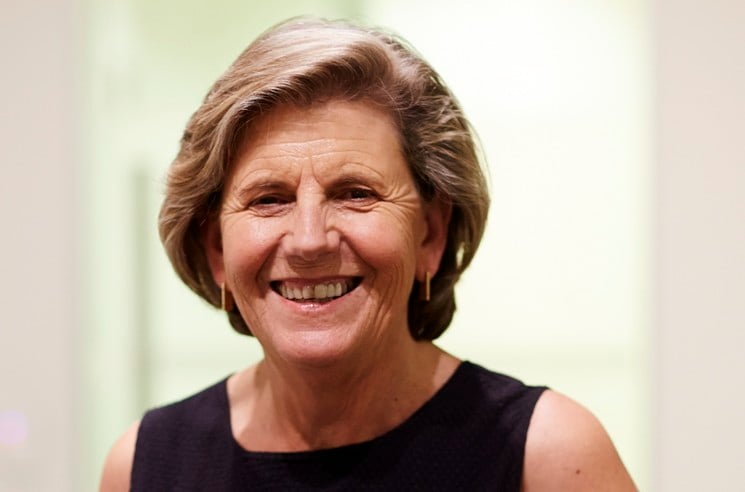 The R E Ross Trust Story The R E Ross Trust has always been innovative. A private trust, established by the Will of Roy Everard Ross in 1970, the first Trustees decided to concentrate on activities in three fields and to “give priority to particular projects rather than merely making donations to established agencies and institutions.”  One of these fields was: “Nature conservation, with particular regard to the purchase of land for the protection and preservation of flora and fauna”. Chairman of the Trustees, Eda Ritchie AM, and CEO Sylvia Admans see their roles as essentially about ‘interpreting benefaction’. Eda has been a Trustee for 14 years, and has much experience of working in the interface of government, community and conservation. She was on the Victorian Environmental Assessment Council for 5 years and the Environment Conservation Council for 4 years. Sylvia joined the Ross Trust in 2011, after establishing and leading the Foundation for Rural and Regional Renewal (FRRR) in Bendigo for nine years. She has a deep-seated understanding of places and communities in rural and regional Australia, and immense knowledge of how the philanthropic sector can facilitate change.

Eda: The R.E. Ross Trust has always funded the environment, to varying degrees. It’s not a large proportion of our giving, for clearly Mr Ross’s greatest wish was to look after disadvantaged and vulnerable people in Victoria , but it was a stated wish in his Will. Over the past 10 years about $2.8 million has gone to the environment. Sylvia: The Trust is able to fund broadly and has chosen to have four areas of impact: Vulnerable Victorians; Children & Young People at risk; Public Education; Australian Flora & Fauna. We invite applications across all these impact areas. However with Australian Flora & Fauna, because it is a field requiring particular expertise, we have an ‘expression of interest’ stage – the only funding program where we do that – so we give people a reasonable indication of whether their application would be likely to be successful. We primarily fund land acquisition, as well as some smaller practical projects across land and marine conservation.

Eda:  Our main strategic goal is to help rescue high conservation-value land which is under threat. We don’t tend to fund environmental advocacy or research. I think the most effective environmental funding we’ve done has been in land purchase: Neds Corner Station has been the most outstanding example, and a most unusual model. We didn’t start out to make a big donation, the original intention was to pay the deposit and to underwrite  the mortgage interest payments for the purchase, until Trust for Nature could raise the money. Sylvia:  But we ended up granting over $1M in total, enabling Trust for Nature to add a  significant portion to their holdings. Eda:  Yes, it’s really their flagship. It was the first time they had the opportunity to remove stock from such a big area and watch it come bouncing back. It’s been just amazing to watch.  And the fact that they discovered some new species that they thought were long gone … Sylvia:  Hmmm, those huntsmen spiders, and the truffles! Eda: That year, 2002, many trusts had a greatly enhanced income because we started getting the franking credits back. We’d all been up to Neds Corner and we were so impressed with the vision they had for it and the opportunity there was to have this significant place, that we put in quite a lot of  money. Since then we’ve funded other groups to buy that last block that is a link in an important aggregation of properties to preserve a conservation corridor.  A recent one was down at the Otways in South-Western Victoria: when the last  bit of privately owned land,  landlocked by the Great Otway National Park and the Conservation Ecology Centre (CEC), became available for purchase we supported the CEC to buy it. It was being used as a turnout paddock for cattle, which was impeding the growth and spread of native flora and fauna.  There’s a very enthusiastic group down there doing some wonderful rehabilitation and now that is a viable corridor for wildlife.  They’ve discovered that the quolls, which they thought were extinct down there, actually aren’t!

We’ve also made lots of small grants to support people in the field, often working with particular species. We funded an exciting program in the Grampians, which was  breeding endangered brush-tailed rock wallabies through surrogate mothers, which were ordinary wallabies. Sylvia:  However, because we don’t have a lot of expertise within the Trust, our main strategy with environmental small grants is to give a lump sum every year to the Norman Wettenhall Foundation to  make small grants on our behalf. The Ross Trust actually initiated that program, based on experience of other small grants programs such as FRRR.  We recognised that Wettenhall had the capacity in the grass-roots environment space, and created the first partnership, suggesting they could perhaps  grow it and attract other partners. Since that time four other foundations have joined this collaborative funding pool. We can all learn so much from working with others in this space.

Commitment to the AEGN

Our commitment to the AEGN is a case in point, we support them both in terms of being a member and also as a Sustaining Supporter, where we make an annual grant to assist them to build the capacity of the organization. Eda: I think the AEGN has done a huge amount to put the environment in grant-makers’ headlights. It’s what we hoped would happen, and its very consistent with our mission of  preservation of fauna and  flora.

Grantseekers – a rich source of ideas

We also we get some really rich and wonderful ideas coming in through the applications we receive. It’s a shame that so many foundations are closed to the opportunity of hearing from the community through their submissions. I think they are the losers. Sylvia:  Yes, applications are a great predictor of community needs and trends, and in fact grant-seekers are a lot more savvy now too. Theirs is no longer a scattergun approach. So we try to create much greater clarity about our work, what we will and won’t fund, and that in turn leads to a higher success rate. It’s about not wasting effort too, our or the grant-seekers’.

A mainstream issue, but a charitable new kid on the block

Eda: One big change I’ve noticed – because I’ve been around on the fringes of the political world for a while – back  in the ‘80s trying to get the environment on the political agenda was practically impossible – there’s no votes in this so just forget it!  Now, 30 years later, it’s moved right up the scale of important political issues, and I think that force is going to continue, and we can expect to see the funding gradually increasing, along with the recognition that it’s critically important. Sylvia:  Yes, certainly the environment is a mainstream issue in society, not a peripheral issue. However in charitable definition terms, it is still the new kid on the block. If you look at where charity came from, which is the relief of poverty and the advancement of education and religion, that understanding still is predominant in people’s minds today, and the primary focus of much structured giving. I do think that individual, private philanthropy has a great opportunity to challenge this conservatism:  if the environment is someone’s individual passion, they can follow their heart, and their head, to support it.

Increasingly evaluation is important to us. We get an acquittal report answering a simple set of questions, and then we overlay that with an analysis internally to see how well we thought it tracked, and what we learned. Eda: This process really does inform our grant-making because we think about how each grant went, asking why didn’t this project work as well as we expected, or how was it that this particular one exceeded our expectations? It does help to have a well-resourced office (4.9 EFT), able to research all these things, because you can’t just write out cheques. Our staff have strong relationships with our grantees, and such a lot of experience, understanding what works and what doesn’t. Sylvia:  We do this consistently for all our grants now, so we’ve got capacity of learning at a variety of levels. So much of philanthropy is done at the front end, making the grants. We call it ‘outcomes reporting’, and it completes the loop. The final step is really communicating that back to the grant recipient, sharing what we’ve learned as widely as possible, and ensuring it informs the next grant or project.