Tagged in
Robert Purves AM is a businessman, environmentalist and founder of The Purves Environmental Fund.

Before establishing the Fund in 2004 Robert chaired a large publically listed health care company. Robert plays a key role in a wide range of organisations – he is the current President of WWF Australia, a founding member of the Wentworth Group of Concerned Scientists, a Director of Earth Hour Global, a Director of the Climate Council, a Patron of the Lizard Island Research Station and a Governor of the Australian Youth Climate Coalition.

I describe myself as an environmentalist

I think the term ‘greenie’ is a bit of a misnomer in Australia, being the name for supporters of the Greens political party, as well as those passionate about conservation.

Australia is really at the cross-roads now, in terms of the environment.  The three key environmental issues we face are: the threatened roll-back of federal environmental laws that were 30 years in the making; the urgency to protect the Great Barrier Reef from multiple threats; and dealing with climate change. There’s a call to action so that we don’t allow these disasters to happen.

Whilst I’m passionate about the environment, I had a career in business. I was  fortunate to chair the DCA Group, a large health company, and on the sale of that business I decided to donate not only a lot of time to environmental causes but also a lot of cash. That led to setting up the Purves Environmental Fund in 2004.

The Fund is of a size where we can have more than one focus. Therefore we take a portfolio approach, where we work across a number of organisations and approaches. We focus on landscape management, climate change and capacity building, often helping smaller NGOs in the environmental space to have a more sustainable financial platform.

My choice to fund climate change came about simply because, in my view, unless we address this it won’t be worth addressing anything else! Clearly Australia is also undergoing phenomenal change driven by the mining boom. This is impacting on communities across the country, and having huge environmental impacts too, whether in the Great Barrier Reef or a tin mine in the Tarkine in Tasmania.

How can we get a better balance between development and conservation?  I think communities need to speak up, and it’s also incumbent on science to stand up and be counted. So we need a mixture of increased levels of activism at the local level, and a stronger use of science to get environmental outcomes. Some key scientists, such as those in the Wentworth Group of Concerned Scientists, are speaking out and taking a lot of risks despite facing attack from the shock jocks.

Connection to the land

My connection to the unique Australian landscape is really important to me and I want to help preserve that. My mother’s family is from the land, and at school I used to do a lot of bushwalking.  I was a member of the local conservation group – we used to chop down privet in the Galston Gorge north of Sydney – so I’ve always had an involvement in landscapes, and that motivated me to try to preserve them.

A lot of people really care about the environment, it is consistently on the top 10 list of things that Australians are concerned about, but there is a disconnect – it’s not a cause people give money to. Not enough funding goes into environmental NGOs. Because I’ve been involved in the not-for-profit sector I realize that without cash NGOs can’t do anything, so we’ve got to try to assist those who are doing a really good job.

We are particularly interested in the capacity building of NGOs, for example we gave WWF in New Zealand funds to do a big marketing campaign to grow their supporter base. Today they have about 10,000 supporters which gives them about $3M per annum to use to undertake projects to help the environment.

We support the AYCC [Australian Youth Climate Coalition] with matched grants, matching their fund-raising dollar for dollar. Youth has an extremely strong voice when it comes to climate change because it’s probably impacting more on their lifetime more than ours.

The various Conservation Councils in Australia play a really strong role too.  Whilst we have good national environmental NGOs we have, I think, rather weak State-based organisations which are chronically under-funded and rely too heavily on declining government funding.

Indigenous land managementAdvocacy based on evidence

Advocacy is also very important. In every environmental issue that we face in Australia we have an opposing side, and let me tell you these people are really good advocates. The conservation movement hasn’t been able to advocate strongly enough, and that’s why we particularly want to fund it. Using evidence to drive advocacy is essential – we need to argue our case with facts, so it revolves around the science.

A real standout project for us was Tim Flannery’s book, ‘The Weather Makers’. Who would have thought that supporting one of Australia’s leading scientists to travel the world for 6 months would lead to a seminal book that would influence so many people globally. I don’t think many Australians realize how significant ‘The Weather Makers’ was globally. It achieved real leverage in the climate change debate.

However the greatest environmental gain that I’ve been involved in has, without a doubt, been the halting of broad-acre land clearing in Queensland in 2001. Clearing up to 1 million acres a year brought about major biodiversity loss, so that was a really important win. But unfortunately, and with considerable angst, we’ve just seen the Queensland government reverse its decision and revoke those laws, which is a very sad moment.

The Wentworth Group of Concerned Scientists, of which I am a member, goes about connecting science and public policy by providing a pathway through some of the thorny environmental issues that communities and government faces.  One highly ambitious work in progress is a new Accounting For Nature measuring system to so we can see to what extent our interventions are improving environmental conditions. It’s getting a lot of interest from state and NGO agencies at the moment.

Everyone has a moment that really dictates a change of behavior. Climbing Mount Kilimanjaro was one of those moments for me, and another was going to Greenland, standing on an ice-sheet two kilometres thick, and realizing that if that ice is released through climate change it would increase the sea level by six metres! That’s a pretty scary. One of the key things for us as environmental supporters is to go out and look at some of these big environmental challenges, because that first-hand experience will trigger some behavioural changes, and help us dig deep to address these urgent issues. 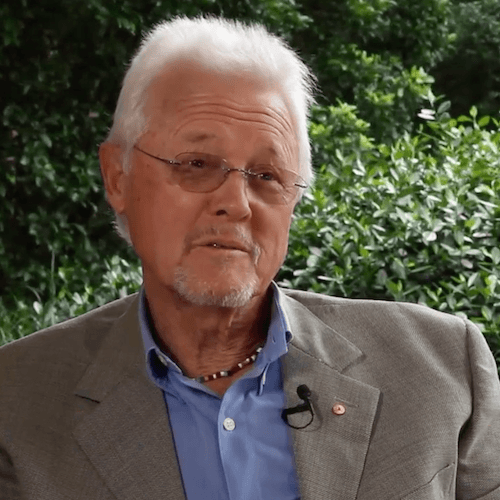 In 2016, entrepreneur and philanthropist David Thomas pledged the bulk of his wealth to philanthropic causes. The majority of this will go to environmental not-for-profit groups – a first for Australia.
Read more 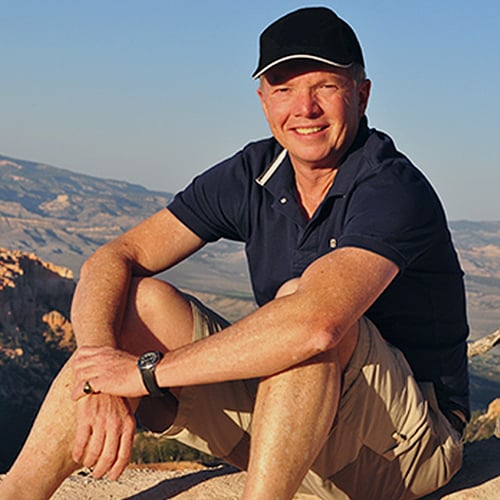