Tagged in
It is heartening to hear stories of hope in troubled times, so David Rothfield makes for good company.

He has plenty of inspiring tales to tell from 30 years of environmental activism and philanthropy, which began back in the depths of Australia’s last economic recession.

“I’d been working overseas for 27 years as a civil engineer and returned to Australia in 1992” David recalls. “After about three months of job searching, I started asking myself, is this really what I want to do? I’d seen the environmental degradation that had resulted from some of the engineering work I’d been involved with in developing countries, and thought rather than getting into something that probably involves chopping down more trees, I had to learn how to grow trees instead.”

In what would probably be described as a ‘pivot’ in these COVID-19 times, David changed direction and enrolled to study horticulture at the University of Melbourne’s Burnley College, going on to buy a tree nursery in Melbourne’s Dandenong Ranges, which he and his wife Pam managed for 15 years.

A son’s activism, a father’s philanthropy

During this time, David became more involved in environmental issues, including as a volunteer with climate solutions think-tank Beyond Zero Emissions. He had become increasingly concerned about climate change after reading several influential books on the issue, including Tim Flannery’s TheFuture Eaters. It was also during this period, in 2010, that David’s environmental passion spilled overinto philanthropy when he took on the pro bono role of managing The NR Peace and Justice Fund established by his late father Norman Rothfield.

“My father was passionate about peace and justice causes, but in his later years became aware of environmental issues and was supportive of my environmental activism. He stipulated for funds to be distributed within 10 years of his passing [by June 2020] as he felt that way, he would get maximum bang for his buck and would be influencing the world that he knew. For the first five yearsof the fund, most went to the causes he stipulated. I then realised there was more money in the fundthan my father had anticipated, so for the second five years, while the causes he wanted to benefit continued as beneficiaries, most of the funds were directed to environmental and more specifically climate causes — the main threat multiplier to all the causes he held dear.”

I’ve learnt the value of networking, of sharing experiences, exchanging ideas and finding ways to work together

Several well-known Australian environmental organisations have received generous support from The NR Peace and Justice Fund over the past decade, including Greenpeace, the Australian Conservation Foundation, Farmers for Climate Action, the Australian Youth Climate Coalition, Environment Victoria, The Australia Institute and the Climate Council. For David, Market Forces — a Friends of the Earth project — has been particularly gratifying to fund and a significant beneficiary, as has the Environmental Defenders Office (EDO).

“The EDO came into my focus because in 2014 — which was when Whitehaven started developing the Maules Creek coal mine in New South Wales — I decided to join the call to lock on to mining equipment to disrupt the work in establishing that mine. I put myself at risk of being arrested, which I was — my wife and I were both arrested. We were charged and given a $3000 fine each. EDO backed us up, and on appeal the conviction was overturned, and we were given a good-behaviour bond for 18 months”. David says in jest “That was several years ago, so I can go and lock on again!” Amplifying impact through the AEGN

The NR Peace and Justice Fund has also contributed $1.5 million to the Australian Environmental Grantmaker Network’s Environmental Giving Pledge, which seeks to raise an additional $50 million for the environment by May 2022.

A member since 2015, David says the network has given him a helpful framework for engaging with others wanting to provide financial support to address the threats of climate change.

“This engagement has helped me to learn about the range of not-for-profit organisations working in that space and the skills and successes of those working there. I have then been able to contribute to the discussion from my own experience and insights into what matters most. From this interaction, I’ve learnt the value of networking, of sharing experiences, exchanging ideas and finding ways to work together.”

Over the past 18 months, the development of gas resources in the Northern Territory and Western Australia has been particularly concerning for David — “the combined climate damaging impact of these gas resources will far outweigh whatever the Adani mine could have done” — and it’s a concern he has acted on with other members.

“I’ve alerted a number of members to the fact that here on the east coast we’re somewhat removed, but things are happening on the west coast very quietly, in the Kimberley and the Pilbara. I feel one of the major contributions I’ve been able to make has been to gain recognition among other grantmakers of the need to support environmental issues in western and northern Australia.”

While The NR Peace and Justice Fund may have run its course, David is only just getting started. 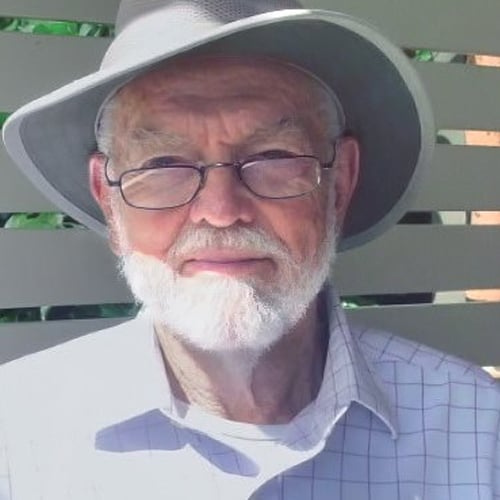 Professor Lynne Madden and Professor Peter Sainsbury are a couple whose careers have spanned the entire health sector.
Read more