Tagged in
For John and Meta Goodman, giving is both a privilege and a priority.

With three generations of Goodmans keenly supportive of the work of the Brisbane-based Goodman Foundation and The Moreton Bay Foundation (the latter established with a $850,000 gift and pledge from the former), philanthropy has become deeply imprinted in the family’s DNA.

For second-generation family member, James, the family foundation has provided a focal point that brings everyone together to “share, create and reinforce” the family’s values.

It’s been an important part of my life for the past ten years or so,” James says. “Our family foundation meetings are a ‘place’ that mixes family interactions with the opportunity of making a meaningful difference in the community. That’s a rare opportunity and it’s been a privilege to be involved. I also feel some responsibility to make sure it’s done well.”

James’ own children also participate in the family foundation meetings, with each of John and Meta’s children and grandchildren being given $1500 a year from the age of eight to give to a cause of their choice provided they give a small talk explaining their decision at the meeting.

“This has been enormously rewarding,” John says.

“I’ve always thought talking about giving is the last taboo,” John continues. “We were initially very cautious and reticent to talk about what we were doing but I remember years ago I had to stand up at a luncheon and explain our support for a cause in East Timor and say how much we were giving.

“At the time I thought it was the worst thing I’d ever had to do. But afterwards the chairman came up to me and said, ‘You are a great role model’.

“So, that’s why we keep talking about it, because we’d like to see philanthropy become more accepted and widespread in the community,” John says. “Giving is a pleasure. It’s good for the soul of the donor and giving as a family creates awareness and helps family members become less self-centred.”

This has been enormously rewarding.

The Goodmans supported various charitable causes as their children were growing up and were active volunteers, particularly with health and disability organisations which had helped their two daughters.

John and Meta served on a number of non-profit boards while John, who had an accounting background, established Goodman Private Wealth in 1987. “I always liked helping families with their money and their purpose,” he says.

The decision to start a family foundation, Meta says, was catalysed by two events.

“Two things coincided in the same year” she explains. “John had been involved in a property development and I was an inheritor. We’d never been on the bread line, but we certainly had more money than we needed.”

Upon setting up the Goodman Foundation, John and Meta both believed it was important to focus their giving.

“We decided we’d support marine science in Moreton Bay based on our personal interest and the fact that we thought it was terribly important because we believe the environment is the most important issue facing the world today,” John says.

“While we couldn’t in any way tackle the huge issues, we thought we could have an impact on the local scene with our small contribution. We hoped we could leverage our little bit to encourage others to help protect the Bay.”

“We’re both people in our 70s and we see a huge change in the Bay since we were married,” Meta adds.

“Because we can’t show our grandchildren the things we saw, we feel that we’ve lost over those 50 years. Even though the research and scientific studies we’re supporting will take time to come to fruition, we didn’t want to wait another 50 years to get started and risk there being nothing left.”

“We joined the AEGN when we started the family foundation because we thought it sounded like a good fit,” Meta explains.

“Since then our relationship has become an even better fit and we’re hoping to be able to do more for the environment in future.”

For John, one of the key benefits of the AEGN membership is learning from the experiences of peers.

“We’ve had a great deal of help from the AEGN,” John says. “Going to their conference and hearing others’ stories really inspires you and you learn what to do and what not to do. That’s important because you don’t want to re-invent the wheel.

A collaboration with the Moreton Bay Foundation. Meta and John on the far right of the photo. 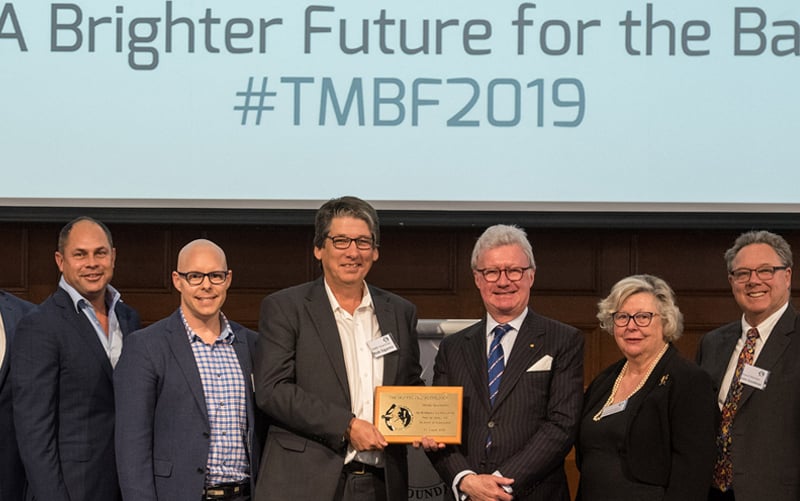 Moreton Bay extends from Caloundra on the Sunshine Coast to Southport at the northern end of the Gold Coast and includes the popular island holiday destinations of Moreton, North and South Stradbroke and Bribie Islands. The fisheries, aquaculture, port services and tourism industries all rely on the health of the Bay.

“The south east Queensland population is set to double by 2050 so we know that there will be a lot of development around the Bay, but it needs to be done in a sustainable way,” Meta says.

“There’s a lot of degradation happening from overuse and there’s a huge problem with sediment coming down from the catchments, particularly in flood events. The Bay itself doesn’t flush very well so the sediment sits there and stops the light from getting through which stops the seagrass from growing and the fish. The lack of light also encourages blue green algae which takes up what little oxygen is there.”

One of the founding principles of The Moreton Bay Foundation is collaboration and although John says the journey to establish the Foundation, which is a company limited by guarantee for a charitable purpose, “was a lot harder than we imagined”, the early impacts have been extremely heartening.

“We wanted to try and get the universities and the scientists who were doing research in the Bay to speak with one voice so that it would get out into the general public,” John explains.

“They all told us it was a good idea in theory, but in practice they all compete, especially for research funding.

“The Goodman Foundation funded a community forum about Moreton Bay and there were 150 scientists and other bay people. Scientists presented five-minute papers (pdf) about what was happening in the Bay. After that some of the people got together because they thought they should stress to government how important the Bay is to tourism, recreation, wellbeing, industry and fishing so we had this little meeting and wrote a beautiful letter and nobody would sign it!

“The scientists were reluctant because they didn’t want to upset the applecart and we couldn’t sign it because we were nobodies. That’s when we decided a foundation for the Bay was needed.”

After speaking with Associate Professor Wendy Scaife at the Australian Centre for Philanthropy and Nonprofit Studies, the Goodmans realised it would take more than a letter to get the ball rolling.

“We had a long meeting with Wendy and told her what we were thinking of doing,” John says.

“Who do you think should give first?”, she asked.

Meta says that conversation was a turning point and spurred the Goodmans to earmark $850,000 for The Moreton Bay Foundation.

“It made a big difference because people knew we were genuine and committed,” Meta explains.

“That’s right,” John chimes in. “I think the money’s main purpose is to get people’s attention.”

Another key point Wendy Scaife raised with the Goodmans was whether they’d thought about giving unconditionally.

“That’s about letting go of control and giving other people a leg up,” John explains. “We’ve taken Wendy’s advice on board and we try not to give with any strings attached. Even though we’re quite passionate about what the Foundation is doing, we try not to be control freaks but let the scientists and other directors decide.”

Dr Ian Tibbetts, Head of marine science at the University of Queensland and a committed supporter of the Foundation, guided John and Meta through the labyrinth of university bureaucracy.

Though the universities and QYAC had agreed in principle to join, getting agreement on a constitution was another significant piece of work, for which John and Meta employed Faileen James, a consultant who was instrumental in getting the parties “onto the same page”. Cameron Costello, CEO of QYAC, was another strong supporter. “It wouldn’t have happened without these people” Meta stresses.

A year since its establishment, John says the Foundation is “progressing more quickly than Meta and I ever dreamed. A full time CEO is to join the foundation any day.”

“We really hoped the Foundation would be a voice for the Bay and would collaborate with universities, government agencies, other non-profits, the Indigenous community and the corporate sector,” John says.

“We thought it would take years for all these people to trust the Foundation, but their recognition and willingness to not only talk to, but work with, The Moreton Bay Foundation has quite astounded us. We’re confident that the Foundation will be a significant player in setting policies to protect the Bay.”

We allocated $850,000 to help set  up the Moreton Bay Foundation to protect the bay and give it a voice.

We decided to increase our funding when we realised there was a lot of research being done about the Moreton Bay but no action coming out of it and nothing much was getting through to the general public or government.

For us, this isn’t about chaining ourselves to trees or being partisan — this is about broad collaboration.

That is why we support the AEGN’s Environmental Giving Pledge to reach $50 million in five years. 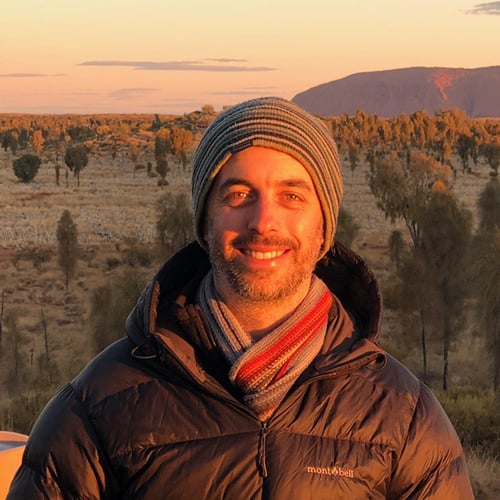 Eytan Lenko is a philanthropist and an influential climate change advocate.
Read more 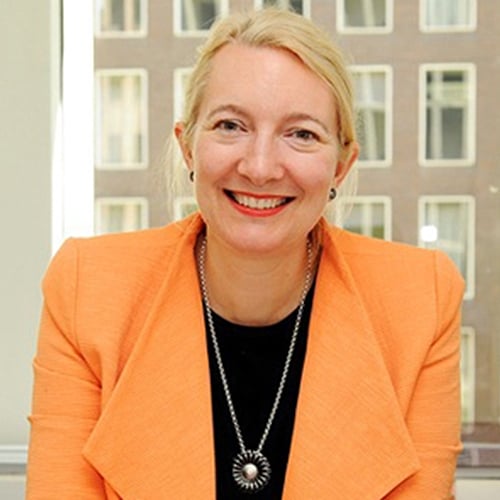