Tagged in
John Preston is new to the environmental philanthropy game, having started the Auxilium Foundation 18 months ago following the sale of his business. He is also a recent signatory to The Environmental Giving Pledge, and focuses his grantmaking towards the oceans and on climate change.

For John, the step into the world of environmental philanthropy has represented a lifestyle shift: It marks a change in focus, and a deep commitment to preserving the world for future generations in a way that goes beyond financial investment.

John credits nature for living in Australia in the first place, having moved here 30 years ago to dive on the Great Barrier Reef. Yet following a degree in Marine Biology, his career in advertising and marketing began to take up most of his energy.

“I was lucky enough to build a business attractive enough for a global company to acquire us, which created the opportunity for me to carve some funds out to create a Private Ancillary Fund, The Auxilum Foundation, meaning help in Latin.”

John recalls that it had “always been in the back of my mind to be a philanthropist.” Yet it was a special moment shared with his daughter which proved to be the final motivator to start giving to the environment.

“I was watching Damon Gameau’s documentary 2040, in which there’s a scene set 20 years in the future where Damon’s daughter asks him as a generation, what were you guys thinking? This was in reference to damage my generation did to the environment.”

“I remember saying to my daughter as we watched 2040 that I never wanted her to ask me what I did about climate change at the time and for me to say I did nothing. Things were really building up in me for me to want to start giving as soon as I could.”

Having sold his business, John’s involvement in philanthropy is deep – he is driven to contribute time and energy as well as finances to address environmental issues.

“I have lots of thoughts about combining financial contribution and getting mentally and physically involved. If I can help in other ways – for example if an organisation wanted any insights or work done involving communication planning or marketing – I can provide mental capacity for free. I also want to get involved physically and travel, which is something that I absolutely love. If I can bring together that financial contribution and physical and mental assistance, that would be my perfect combination.”

“I suppose you could call me an ‘active’ or ‘adventure’ philanthropist, although COVID-19 has put a hold on this for now. I believe the more you are involved with a project, the deeper your understanding is and with fresh eyes, the more you can contribute. You basically become more passionate about the cause.”

You’ve just got to push every dollar you can to help.

There’s no point sitting on a pile of cash ten years later saying I should have invested that on great ideas when it’s too late.

This has been a theme since John first stepped into philanthropy 18 months ago. “I phoned up World Wildlife Fund (WWF) out of the blue and said I want to contribute some money to projects involving the ocean, but I want to know exactly where that money is going.” The staff at WWF quickly introduced John to the Turtle Cooling project based in Queensland, which seeks to address the increasing feminisation of green sea turtle hatchlings on the Great Barrier Reef.

John was shocked to find out that of the turtles born in Queensland in 2019, more than 99 per cent were female. This was a result of increased incubation temperatures due to climate change. “What the researchers are trying to do is figure out how we can bring back the gender balance of hatchlings by minimising the impact of the sun’s heat on the nest sites. That could be simply by using shade cloths, it could be with irrigation or any number of other experimental techniques.”

“I contributed to the research study in phase one, which produced some good results when they shaded the nest sites. The next step was to cover more ground and take more temperature tests of the sand up and down Queensland.” John asked WWF what the best way he could help with this was, and they responded by asking for investment to buy more testing equipment. This has allowed more students to gather data across a wider area for a better picture of the situation.

The Turtle Cooling project investigated the feminisation of Green Sea Turtles on the Great Barrier Reef. Being involved in this project has influenced the way John approaches his funding. “For me this crystalised the need for help, but also the impact of climate change on something very specific. I like the concept of microprojects, because I can get my head around them, rather than being so overwhelmed to the point where I feel like there is nothing I can do.”

“I look for projects where I can donate money now that will have an immediate impact – I want to get involved quickly and donate as much as I can to help a project progress.”

This strategy led John to Greenpeace and their corporate renewable energy (REenergise) campaign. John’s willingness to use his expertise in marketing and business in conjunction with his ability to give funds made him an ideal person to be involved in the campaign. “As a group we workshopped and finessed the broad idea: To focus on the top corporate energy users – and especially on some of the most influential and high energy using brands in the ASX100 in a very targeted manner with tailor made communications, pressuring them to go sustainable.”

The campaign has had big results, and fast: In the last year, Telstra, Woolworths, Bunnings, Officeworks, Aldi and most recently Coca Cola Amatil have all committed to go 100 per cent renewable power by 2025 or sooner across their Australian operations.

“I’m really pleased for Greenpeace and for the community that we’re getting results so quickly – the campaign can show a really clear impact in terms of the number of tonnes of carbon abated and also creating a great public story about the reliability and cost effectiveness of renewables. It’s fantastic that the big corporates are recognising the need to commit to renewable energy not just for their own busines wellbeing, but for the wellbeing of their own people.”

Indeed it was John’s sense of urgency that made signing on to the AEGN’s Environmental Giving Pledge a logical step in his philanthropic journey. Despite being a new funder, the amount he is giving will be rapidly scaling up over the coming years.

There’s a wonderful part of being on this journey that feels quite fulfilling, where you know you’re making a contribution.

Being part of the AEGN is helping me become a better donor, making me aware of projects I wouldn’t have otherwise known about and making me generally more educated.

Moving away from corporate life and finding time to do something like this has been so much more rewarding than I ever anticipated.

“You’ve just got to push every dollar you can to help. There’s no point sitting on a pile of cash ten years later saying I should have invested that on great ideas when it’s too late.”

John does however carry a great sense of optimism about the state of the climate movement.

“I felt like 18 months ago, coming on this journey to become a philanthropist and focus on the environment, that I’ve really picked up on the crest of the wave. It feels like there has been this building momentum up until this point, but now it seems that there is this exponential push. There is much broader awareness of what is happening in the world compared to two or three years ago.” 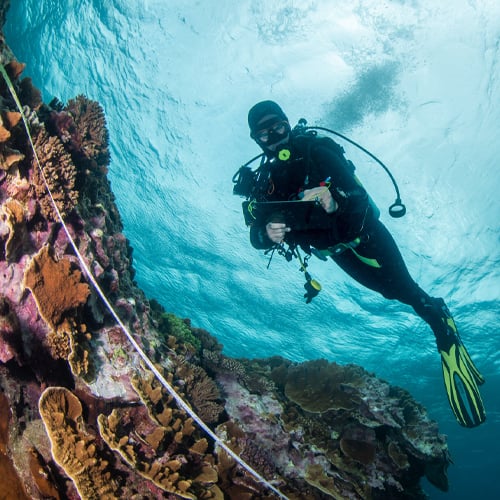 For John and Meta Goodman, giving is both a privilege and a priority.
Read more